Born in California’s Central Valley, like her good friend Maxine Hong Kingston, Judith Foosaner’s appetite for and understanding of, those aspects of artistic and cultural life more commonly associated with the city, has been consistently ravenous. An accomplished teacher, writer and visual artist, I have admired her work for many years. In 2007 I included Judith’s work in the Exhibition “Silence, Exile and Cunning” which, I curated for the Sonoma Valley Museum of Art.

One essential aspect of her work is its emphasis on drawing and its place in the shifting fortunes of painting. Few artists have so intensely and relentlessly probed the possibilities of line. In charcoal and graphite, acrylic and oil Judith has certainly been the equal of better-known artists such as Cy Twombly or Brice Marden, other masters of the linear.

I find her works intensely physical. In fact my reading has consistently witnessed a celebration of physical existence.  Gravity and flight, speed and resistance, weight, pressure and direction are all present in the work. Recently I visited Judith in her studio in Sacramento where she has returned after living and teaching for years in the Bay Area: thirty-four years at the California College of Art and a two year stint at U.C. Berkeley.  I asked her about her early years and also about the relationship of her work to Chinese and Japanese calligraphy. 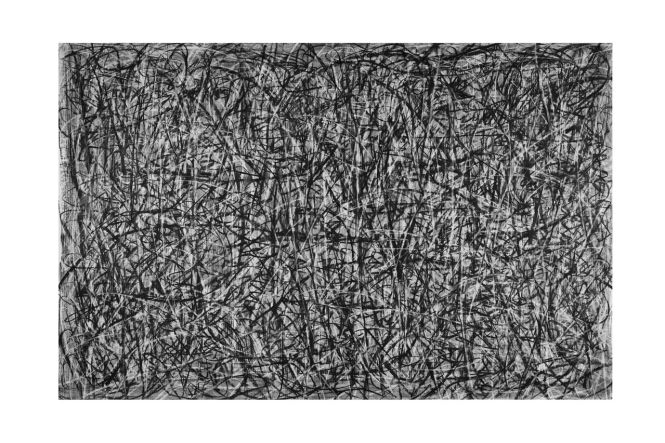 Frances McCormack:  Judy, you became an artist and a teacher at a time when it was pretty difficult for women to be taken seriously. Can you talk about what aspects of your early, formative years may have given you what you needed to flourish in this masculine world?

Judith Foosaner:   When I got my degree in English in 1964, I had zero idea of where I was going vis a vis a “career.”  Actually, I’d been on my own, completely self-supporting since I was eighteen. I had no concept of career and was used to living by the seat of my pants in a totally improvisational way.  I careened from one job to another, did a bit of traveling and moved through a space which seemed like a very long tunnel with not a lot of light in sight.
At the suggestion of a friend, I got special permission to re-enter university, for the equivalent of a second degree, and began taking some art classes.  It was an exclusively male art world. There was a restroom for male faculty, but none for female faculty. There wasn’t even a concept of female faculty.  But after taking my first class: that was it.  I knew that I wanted to devote my life to drawing and painting and hoped that with some of the street smarts that come with being on your own and a little or more luck, I could get into college teaching.  I had watched my instructors, sipping their coffee and talking and I thought–Well, I can do that!   In 1970, I did.
Things happened.  I married more than once, but never with the idea of being a dependent and never for more than five minutes.   When I was first taking the art courses, they gave me such joy; just the process and I understood that even if I were at the bottom of the bottom, this is what I wanted to do. I loved visual making and I loved working alone.  That has never changed.

Frances McCormack:  Could you say a bit about your background in literature and how it may or may not have influenced your painting practice?

Judith Foosaner:
Well what did change was my perception of the relationship of my background as a literary person as maybe being a kind of waste for someone who was going on as a visual artist.  The years have taught me–and that became apparent way back–that nothing is lost.  Nothing.  Quite the opposite.  My roots in literature–and they are deep–and they are ongoing–feed my work all the time.  Henry James is with me when I am in my studio.  So is Jane Austen, the Brontes, George Eliot and Dickens.  Chaucer sits in a corner.   Shakespeare is on my left.  Not simply their narratives.  Maybe that aspect less than others.  I feel and resonate to the beauty of their language, to the grit and the glory of their rhythms and the inquisitiveness of their pursuit.   And I want that quality.  I want the beauty of their language-of what they did– to be also in the language of my work. 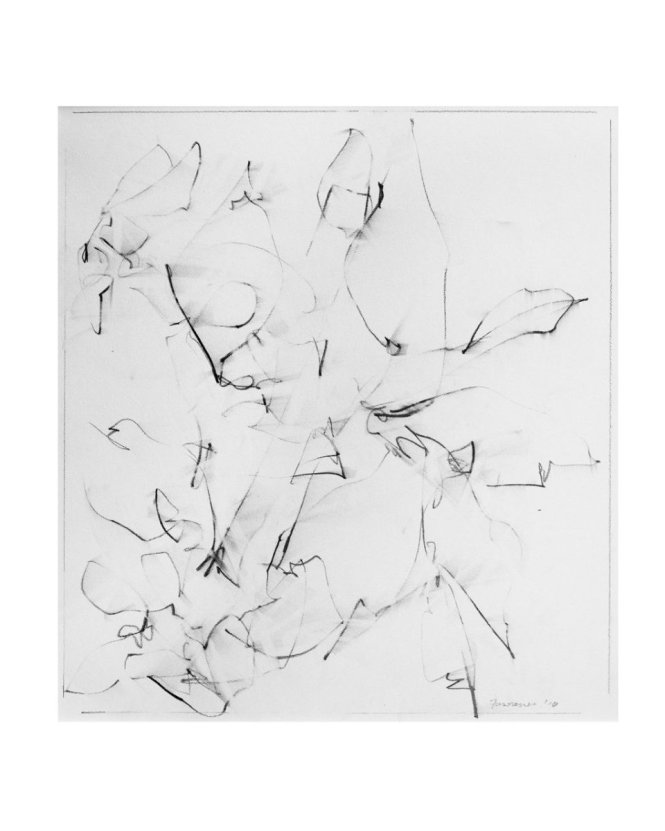 Judith Foosaner:  Certainly my work is greatly influenced by calligraphy–  primarily Chinese and Japanese.  I don’t know if it’s a correct definition, but my idea of calligraphy is a marriage of line and space.  There is rhythm.  There is movement.   If there is a pause, it is pregnant.  Expectant.  Each mark calls space into being.

Frances McCormack: Almost a definition of dance as well.

Yes. The ancient calligraphers said that a line can express anything, everything.  It can.  It does.   There is just something about one line meeting another and then another that is so endlessly magical and full of possibility. For me, drawing is the basis in pictorial art and line is the basis in drawing.

Recently, I went to the de Kooning retrospective in New York.   The selections from every phase of his painting life and the installation of his work were astonishing.  Stunning. What was also astonishing, emphatically so, was his remarkable ability in drawing.   He is right up there with Picasso.   Not second.  Right up there.  As  you moved from one gallery to the next, you could see the struggles of  one phase becoming the triumphs of the next and that had to do, in my  mind anyway, less with the imagery and more with the fact that  he  used drawing , not just to register or reproduce, not just to  exaggerate or amplify,  but  as a vehicle for investigating  the  reality,  the nature and the inventive  possibilities of pictorial  space.  All this through line.  Over and over, I returned to watch his work, always in the hope that it would instruct me.   I wanted to
see what he did as clearly as I could .  I wanted to follow his  example of unflagging,  inquisitive pursuit.

Frances McCormack: I know this conversation could continue for a very long time but I want to thank you for sharing your thoughts on your work. It has been a pleasure!

Judith Foosaner: It has been a great pleasure for me as well. Thank you!

Frances McCormack is an artist, curator she is also currently Associate Professor and Chair of Painting at San Francisco Art Institute.