I must have been 16 or 17 when our arts teacher, who I have much to thank for, once again swapped lessons for a gallery visit, this time to see Max Weiler present his exhibition in Innsbruck’s Galerie Krinzinger. I didn’t know what to expect. At that age I had a vague interest in painting but hardly fundamental knowledge of its history. Still, beside household names like Picasso, Schiele or Kokoschka, Max Weiler would have been the living painter I would have been aware of most. 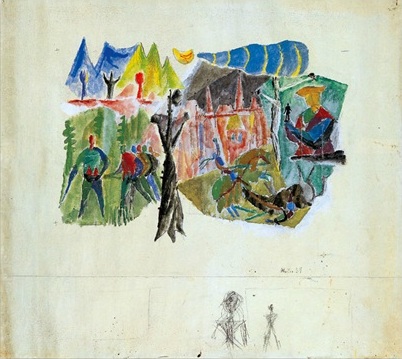 First of all this is because of the two large frescoes he had painted in 1954/55 for the reception hall of Innsbruck’s central railway station. With their bright colours they had not only caught my interest from an early age, I also knew that they had caused controversy at the time. I was aware, too, of another, more fundamental scandal, which his frescoes in the Theresienkirche at the Hungerburg above Innsbruck had caused, painted in 1945/47. Not only was the formal solution challenging in a province which had very much missed Modernity since its beginnings, Weiler had depicted the audience of the crucifixion as Tyrolean farmers in traditional wear, and crucially not only the onlookers, but also the one who stabbed the lance into Christ’s side. Weiler was accused of “defamation of the Tyrolean peasantry” and the frescoes had to be covered for several years, until they could finally stay revealed to the public.

The paintings in the exhibition, several decades on, where quite different though: Large scale canvases to be taken at first glance as abstracts, some so big that they just about fit into the gallery space. One in particular struck a chord. It was titled Above the Tree Line: a huge, roughly 2.5 x 6 meter canvas. The tree line may not mean much to people who don’t live amidst high mountains, but for those who do it denotes a zone of relative remoteness. People usually don’t live above the tree line. It is virtually uninhabitable in winter and certain vegetation doesn’t grow anymore above that clearly visible line that stretches, at about 2000 meters above sea level, horizontally across the Alps.

I remember my first impression of Max Weiler, then in his 70s, who I had, in my youthful ignorance, at first glance taken for a frail old man – and my relative embarrassment as this man appeared to turn into life force itself as soon as he started to speak. I still remember how he started his monologue: after nobody dared to ask a question he challenged the viewers, who all lined up as far away from the huge paintings as they could, to step up closer, because close-up or viewed from a distance, the paintings are no different: “just dirt” (as I, shockingly, remember him saying), specs of paint, no real representation, no attempt to give an impression, no need to step back to take it all in.

The rest I don’t remember in detail. Some of it was about the relative value of representation (“You could see these specs of colours as stones, if you want, but they never will be. However much effort I’d put into making them appear as stones, they’d still be paint on canvas.”). Some was detailed descriptions of how he finds patterns in decayed walls or similar as sources for his paintings, and how he mixes his own tempera. I don’t recall it all, but the passionate delivery had made an impact.

This was the first time painting was revealed to me as an attitude, and as a physical experience.

I eventually moved to Vienna to study and, over time, got more seriously concerned with arts. However, Max Weiler would have been hardly on my radar then.

If I had to pick what I personally perceived as burning issues of Austrian cultural debate at the time, I would say it was a lot about institutions: universities, or part of the state theatres, and first of all the Burgtheater, were at times battle grounds for cultural hegemony, concerns centring around the role these institutions (and Austria in general) had played during the Third Reich and their continuity thereafter, not only in terms of personnel and content, but also attitude and aesthetic form.

Questions of positioning, how to engage (or not), with whom, where and when were important, and in all that my attention and interest was invariably drawn towards more politically radical or otherwise provocative artists, such as Herman Nitsch and his Orgien Mysterien Theater, the stark body concepts of Rudolf Schwarzkogler’s photos and the Viennese Actionists in general, the writings of (by now) Nobel Prize laureate Elfriede Jelinek; or maybe on a slightly less aggressive note: the sculptor Walter Pichler, who at the beginning of the 1970s decided not to make sculptures for sale anymore, neither for private collection nor sponsored by public funding, retreating to a small village in Burgenland, near the Hungarian border, where he builds sculptures and houses for them, slowly, over time, only rarely releasing them for display elsewhere. He works from a position of retreat, as a social stance, elaborating objects located between the cultic and the futuristic, combining earthy materials with advanced knowledge of manipulation.[1]

I had not thought much about Max Weiler, until I learned about the 2004 exhibition, 3 years after the painter’s death, in Vienna’s Museumsquartier, entitled Four Walls.

Four Walls temporarily brought together 4 large scale canvases, amongst them Above the Tree Line, which Weiler apparently had intended to form a corpus, but had never managed to find an appropriate place for during his life time. But there was more to that exhibition than just, for a time, arranging these paintings in a common context: While retrospectives often tend to present a broad view of a painter’s legacy, this exhibition did the very opposite: at least from where I was standing it appeared as the distillation of an essence of Weiler’s work, which, like a lens, allows for a renewed view not only at what was presented, but his work overall. 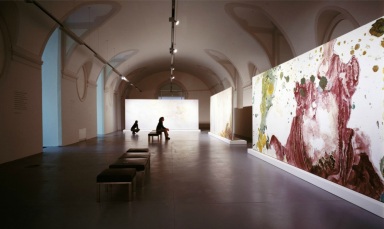 Unusually the paintings – walls [sic] – were presented free standing, as bodies, like sculptures, in a horseshoe arrangement. Instead of bright white and uniform lighting, as is the norm for contemporary art exhibitions, spotlights were used, emitting a maybe warmer type of light and the room itself wasn’t just a rectangular white box, but an old hall with vaulted ceilings, some sparse ornaments.

What I find important in that is that the representation has an element of theatre: a focus on physical presence and encounter. The paintings, like actors, obtain a position in space, “step down” from the wall to come closer to the viewers, allowing and asking for an interaction that is closer than usual.  But they also form something of a stage set in which the viewers can move, find their own position and match their own sensitivities against the subtle consequence and sensitivity of the paintings. Reportedly viewers tended to spend a long time in that room, which is not surprising. The gesture of the arrangement is that of an invitation: to take time to let yourself be affected by the time and reflection stored in these paintings.

The catalogue picked up on that, too, and presents first of all images of the overall room, with people in them. This is important, too, because the common practice is to present paintings as body-less. The catalogue-equivalent to the white cube and indifferent lighting is the frameless presentation of paintings, cut out in neat rectangles, which more often than not don’t reflect the physicality of real paintings – and in general tend to make the perception of paintings a mere intellectual, rather than a physical experience. The intellectual perception of these paintings exists, too, in this catalogue, in an excellent essay by Matthias Boeckl which places Weiler’s landscape paintings within contexts of both specifically German landscape painting (Grünewald, Caspar David Friedrich, Gerhard Richter) and a wider history of the genre (Chinese scrolls), as well as spirituality in painting (Mark Rothko). But it is important, that this is contrasted with images of the more theatrical, physical experience of the exhibition.

What this exhibition in part affords and reflects on is the exposure of the audience to those paintings, to a degree not unlike Caspar David Friedrich’s Monk at the Sea. And exposure appears also as a core element in the way they are painted. In their essence they are hardly wilfully constructed nor are they first of all outpourings of inner conditions. Instead they appear like subtle responses to something external, although translated through the painter: Nature in many parts, or fragments of it. They are also generous, or better: expansive, providing a surface that allows for a stretching (of the soul?) like across a desert, ice, the sky – or indeed the sea.

Many may put this into the realm of spiritual experience. I am happy to leave it at the possibility of heightened awareness, and engagement. It is the subtlety and expanse of those paintings which demand a slowdown in perception, maybe essential for poetic experience, which is one of its effects: A disruption, albeit of the quiet kind, as a chance for re-orientation.

To be noted, too: the painter’s choice of egg tempera (decidedly, from early on[2]), rather than oil, as a medium, which provides a more subtle, quite organic, non-shiny and in its essence maybe less selfish surface. A more porous skin, which suggests permeability. And also: a history of attempts to transcend the flat surface of the canvas into space. In an exhibition at the Tiroler Handleskammer Weiler hung the paintings from the ceiling, spaced out in the exhibition hall; and there is a whole period of paintings with “wings”, fold-out structures that extend and obscure the rectangle of the traditional canvas, subtly stretching out from the walls.[3] Four Walls appears as a climax and maybe conclusion in this attempt to stretch out to or engulf the viewer. A subtle and convincing solution at the junction of painting, sculpture and installation, which manages to successfully engage core elements of the latter without forsaking or de-centralising the application of the dripping wet, which is the core of painting.