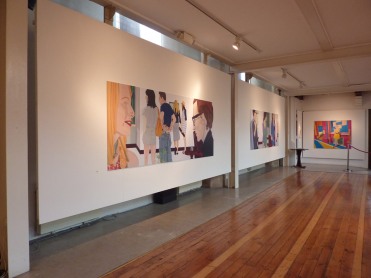 I’m in a pub drinking with a friend who tells me he visited my last exhibition at the Municipal Gallery of Waterford. Now that we’re looking at the works on the exhibition catalogue and when I explain the technique to him he tells me

“I didn’t realize this Mario. I’m surprised. I thought they were real paintings. Acrylics or watercolours.”

Real paintings. How difficult is to make just one of them, I think.

“No, they’re not, they are neither acrylics nor watercolours” I tell my friend – “this is digital art, or  as the computer programmes allow me to use pencils and brushes, you can call them digital drawings and digital paintings.”

Digital Art is not so young anymore, it is almost 50 years old. But its explosion occurred only in the last ten years, mainly thanks to the new technology that finally allowed you to use a computer and a graphics tablet to draw with the same ease you would encounter with paper and pen. The precision of the marks has finally reached perfection and the results are brilliant, though evidently there are still many skeptics out there. 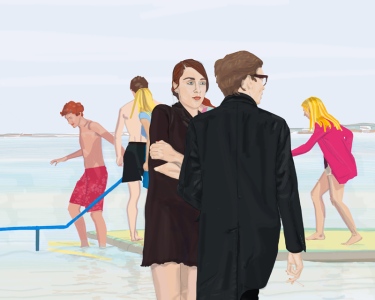 The transition from  traditional painting mediums (oil on canvas, for example) to digital art, closely reminds me of the transition from the typesetter to the word processor in print, or from the acoustic to the electric guitar in music.

The most spectacular advantage of the digital medium is that a digital work exists in a format that doesn’t need to be reproduced in another format in order to be published. This for example means that an original work (not its copy) can now be published immediately and can be seen practically everywhere in the world via the internet.

Digital painting, just like writing in a word processor, exists in two separate forms, on the computer screen and as a print. 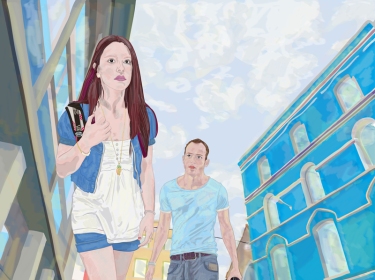 The prints themselves are not reproductions as they are original prints. They are printed with archival inks, usually on  lithographic paper, in different sizes (some of my largest works at Waterford were 300 x 120cm).

Digital painting is often associated with digital photography, but the truth is that even if you create your works on a computer, things do not happen in the matter of a click but on the contrary it is a process that requires a good period of time.  The  head and heart are engaged when you take a picture with your camera, but crucially in executing a painting, even a digital one, the mind, heart and eye have to be brought together in the gesture of the hand. A skilfull hand indeed.

Therefore, don’t be surprised to learn that those who use digital as their medium for painting will keep fine art painting and painters as their masters, models and main source of inspiration. 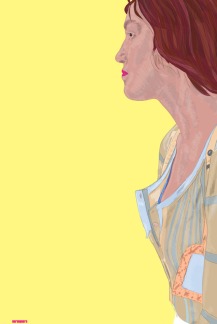 Today digital art is present in commercial galleries around the world, it goes on sale at all the major art fairs, and has entered the greatest  modern art galleries and even fine art museums. And in this regard it is significant to note that a great number of the skeptics have been won over through the work and continuous efforts of one of the greatest artists of our time, David Hockney.  And this, in my opinion, is the most marvellous proof of the link between those two mediums, a proof of the legacy of classic painting and digital painting.

And this reminds us that in the end tempera, acrylics, digital are simply mediums and the only thing that matters, and will always matter, are the paintings, real paintings.

Mario Sughi aka nerosunero is an Italian artist and illustrator living and working in Dublin. He is a member of  the IGI (Illustrators Guild of Ireland) and AI (Associazione Illustratori Italiani) and the author of nerosunero. In Rome, at the end of the seventies, he worked as humorist in Italian satirical magazines Il Male and  Zut. He moved to Dublin in the late eighties where he studied Medieval History and in 1995 he was awarded a PhD by Trinity College Dublin. His work is currently on show at the RHA Annual Exhibtion 2012.

Read Mary Grehan on Mario Sughi in Outside the Lines